On a friend’s blog (Deepa’s Kaleidoscope) I came across this little project…
Grab the 7th book from your bookshelf. Open it up to Page 7. Pinpoint the 7th sentence on the page. Begin a poem that begins with that sentence and limit it in length to 7 lines.
She wrote a lovely little poem and I thought I should try something out too. Now, I don’t do creative writing or poetry unless it has something to do with my personal feelings… all the previous poetry on this blog has been just that… some torment in my head and a few words that vent those feelings.
When I got down to searching my library for the 7th book, I realised that more than first 20 of the books in my library were thrillers/horror or mystery novels… the likes of Dean Koontz, Stephen King and Jeffrey Deaver. I didn’t want to chance upon a morose line and have to get down to writing a morbid poem.
As I searched for a way to cheat the 7th book condition, I saw that 7 of my books were vertically stacked because of the lack of space in my bookshelf. The 7th book in the stack is The Greatest Show On Earth by Richard Dawkins. I grabbed the book and flipped to the 7th page and traced my finger down to the 7th line and voila… here was a sentence that did not make me want to write murderous poetry. The line is ‘handing them some kind of gift or victory’. Of course it would be out of context with the rest of the sentence taken up on the 6th line… but still usable.
Now… I could have used ‘them’ but I changed it to ‘her’ to tighten the poem.
And here it is:

Handing her some kind of gift or victory

He stood in mocking silence, sword down

She challenged him, blithe, never sorry

Urging him to fight or be cut down

His iron slashed, proud she stood her ground

And he saw there never was a plea in her eyes.

Since the poem has no deeper meaning… I had already formed it in my head when I decided to change ‘them’ to ‘her’… it didn’t really take me 7 minutes.

Whenever I post anything on my blog I tend to post some artwork with it which 9 times out of 10, I create on my own. In college, I had a nickname… Xena, The Warrior Princess… and I thought since the poem reflected a warrior woman, I should sketch something along the lines. I found a sketch online (by Luis Royo from a desktop-wallpaper site) that was kind of what I wanted but not quite… so I decided to use that as a reference and create my own Xena. An hour of sketching and painting in Photoshop later here is what I made… 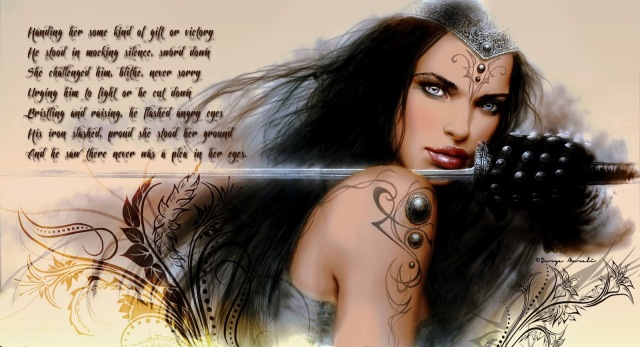